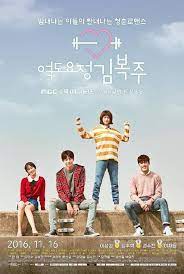 This 2017 Sports come Romantic-comedy revolves around a group of college athletes who experience life and love.

Weightlifting fairy Kim Bok-Joo, says about Kim Bok-Joo (Lee Sung-Kyung), a promising weightlifter, and Jung Joon-Hyung (Nam Joo-Hyuk), a swimming prodigy who happens to study at the same athletic college. Bok-Joo’s father, being a former weight lifter, at present runs a chicken restaurant. Kim Bok-Joo has a love for the scent of metallic barbells and she realizes her love for weightlifting in her childhood.

One day Kim Bok-Joo was walking along with her two friends, accidentally she bumps into Joon-Hyung who is riding through bicycle on a way to the college campus. Joon-Hyung left thinking she looks familiar. After a series of encounters, they finally realized that they both know each other in childhood and Bok-Joo was the one who saved Joon-Hyung falling from the building when he was bullied by his classmates. Their relationship begins to grow.

This series is one of the best romantic-comedy genre dramas. This is a very simple plot but can be so relatable to young people’s day-to-day life. The way they portray every character and the friendship between the main leads at the start tells how realistic this series is.

The first few episodes have a fast-paced storyline and show the development of each character’s relationships. Bok-Joo crush on Joon-Hyung’s Cousin and how she acts around him awkwardly and tried to follow her friend’s advice by asking ”Do you like Messi?” the attempts she tried to impress him presented neatly. Though Joon-Hyung offers to help her when he finds out about Bok-Joo’s crush, his never-ending teasing is what made this series more fun to watch.

The friendship between the Bok-Joo and the two girls Jung Nan-Hee and Lee Sun-Ok is another important subject to talk about. The way this trio moves along with the storyline is what makes their friendship a matter in this series. The scene where the girl’s chores their swegg catchphrase ‘Awesome’ tells you all. Those became a trademark scene from this drama.

Coming to speak about the cliché scenes in KDramas where the main leads protect female leads,  If you think this is the same kind of drama, then you are wrong!. This series is a total disaster when it comes to following the stereotypes as other KDrama. In an episode, where Joon-Hyung uses Bok-Joo as a Shield to protect himself from the water splash alongside the road that is so iconic. That scene cracks me up every single time when I watch and also became trendy all around the world.

Though it started with a fun genre, each character has its pain and difficulties. But thankfully it doesn’t have any dramatic scenes like separation of main leads because of misunderstandings. The only emotional content we could see in this series is how they both help each other from recovering the painful experience and long-distance relationships struggle like every couple in day-to-day life.

Other than the storyline, I think this series has decent viewership because of the actors. We could see the chemistry of the main leads improvise throughout the drama, and supporting each other always without any misunderstandings will be good to watch.

Kim Bok-Joo is an ambitious and naturally gifted weightlifter who inspired by her father. Though her character appears strong, she is an innocent and fragile person in heart. Her innocence showcases when she had a crush on Joon-Hyung’s older brother and being shy around him. What a girl do when she is in love!! She well played it and the way she tries to impress him is portrayed humorously. This drama is so different from Lee Sung-Kyung’s other series where she played elegant and bossy roles. In this series, her clumsy character when she embarrassing herself in front of her crush, the friendship between the three girls and her chemistry with Joon-Hyung tells a whole different story.

Jung Joon-Hyung, a talented swimmer and free sprite, a playful personality who takes everything as it is. Though he plays a perky role, he has also beautifully described his painful emotions from his childhood when his mother abandoned him, or when he had a situation where he meets his ex-girlfriend. What made me love his character more is the way he teases Bok-Joo and at the same time how he showed his care towards her. Is there anyone who has not fallen for Joon-Hyung’s character?  There would be No one!

Song Shi-Ho is a rhythmic gymnastics who is Bok-Joo Roommate and Joon-Hyung’s ex-Girlfriend. When it comes to passion or love, what do you think a girl would choose? Here Shi-Ho chooses her passion. Because of that, she break-up with Joo-Hyung. But what is KDrama without a love triangle? Knowing that she still in love with him, she comes back to Joon-Hyung but faces regret and jealousy towards Bok-Joo and Joon-Hyung’s friendship which leads her to reflect negatively on Bok-Joo.

Jung Jae-Yi is a calm and kind-hearted guy. But he is clueless to foresee when someone tries to impress him. This is clearly shown when Bok-Joo tried to impress him or his friend Ah-Young who had a long-time crush on him. Though it is frustrating when a guy is unaware of other feelings, it is better when his role improvised when he tried to make up with Ah-Young realizing his feelings for her.

So if you haven’t watched it yet, I recommend you to watch it now.  Don’t miss this one of the best rom-com.

Although the drama was well received overseas,it was a moderate hit in South Korea with an average of 4.6%  audience Share.