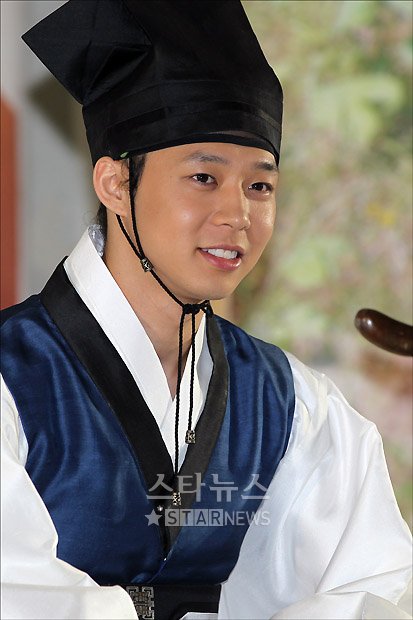 Inspired by the famous novel The Lives of Sungkyunkwan Confucian Scholars, the drama Sungkyunkwan Scandal depicts a story of a woman who disguises herself as a man and thereby starts working as a substitute test taker but finally ended up as a student in prestigious Sungkyunkwan, the Joseon Dynasty’s highest educational institute, where women are not allowed.

In those times where women were not allowed to educate or employed, Kim Yoon-hee (played by Park Min-young) who disguises herself as her brother, Kim Yoon-shik, works at the bookstore to cope up with her family needs! She was then offered to impersonate as candidates to take up the entrance exam at Sungkyunkwan University as a substitute test taker which is an illegal act! Reluctant Yoon-hee agreed to take up the test as a substitute since it would add some amount to her income!

When she is writing the entrance exam for someone’s behalf, She gets caught by the righteous student Lee Sun-joon (played by Park Yoo-chun), but later he supported her to enrol herself in the institute and gradually fall for her!

The real story starts when she shares the room with Moon Jae-shin (played Yoo Ah-in), a lonely person who hides his true self. Further, she has to bear with upperclassman Gu Yong-ha (played Song Joong-ki) who sets his eyes on her to find out her true identity and the strict student body president Ha In-soo (played by Jun Tae-soo) who has a grudge on her.

1. Will Dae-mul be able to continue her studies if her identity is revealed?

3.will Gu Yong-ha able to find about Dae-mul? What would be his reaction?

4. What is Gu Yong-ha’s original identity?

Sungkyunkwan Scandal is a quite different drama, it does not have any unrequited love (with the female lead) unlike usual korean dramas! Though some characters confused me as I felt they love the female lead. Well, I’m not sure, it might be a friendship. That’s how it is pictured.

This drama embraces a fantastic friendship which everyone wants as a student! Every character in the drama has a nickname! Honestly, I just remember only the nicknames. The bromance between Song Joong-ki and Yoo Ah-in will be a treat to watch! Especially I loved when yeo-Rim tells that he is admired by Geol-o masculinity.

This drama depicts how gradually the four friends support each other in spite of having differences in their beliefs, in a fantastic way! I had enjoyed this show completely! I have nothing to point out here, as I’m not a very serious reviewer who pinpoints every scene.

Kim Yun-hee (when girl)/Kim Yun-sook (when a boy), nicknamed “Dae-mul”, a girl who pretends as a boy in order to continue her studies. As in Korean dramas, this gender disguise is very usual and nothing to remark. As Korean drama viewers, we are used too often seeing female leads cross-dressed as a male. Park Min-young would be in the list of one of the top 10 actresses who disguised as a male.

Yi Seonjun, nicknamed “Ga-rang”, always a righteous man who slowly uses his virtue of righteousness because of his friends. He did his role perfectly.I personally enjoyed his romance with Dae-mul.

Mun Jae-sin, nicknamed “Geol-o”. A man who does rebellion at nights. Like yeo-Rim, I too loved him. I feel very pity when every time he bleeds. To the extent, I thought how would a man survive after this heavy loss of blood on regular intervals. I loved all his scenes with Dae-mul, and my mind sometimes (only at times,) wanted this character to love Dae-mul and vice versa.

Gu Yong-ha, nicknamed “Yeo-rim”, an upper-class student who flirts with girls and cares for Mun Jae-shin to an extent. This character’s love for his friend is unshakeable and lovely. He is the only character who was not attracted to Dae-mul. Rather, always looking for Mun Jae-shin aka Geol-o.

Ha In-soo, strict student body president Ha In-soo who has a grudge on Dae-mul.Ha In-soo is not a villainous character, he just raised in that way. When he raised questions about his father’s mistreating a girl, it seemed that he loved that girl to the core. In-soo turns cold when she refused to reciprocate his feelings and that was well expressed by Jun Tae-soo. It is very sad to see that he is not with us anymore! Hope he lives through this role.

Finally, it was a very captivating series and I feel elated to see when these four characters join hands for the right cause. I can’t reveal it, because that is the climax.