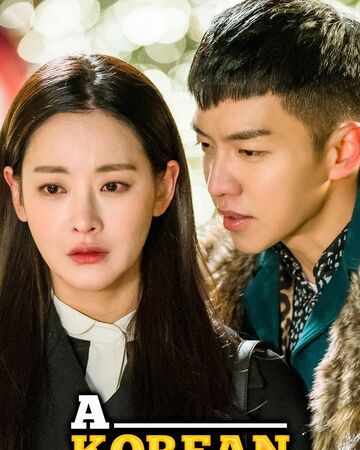 Based On the Chinese classic novel ‘ Journey to the West’, A Korean odyssey portrays the war between Son oh-gong and heaven!

Seon-mi(Oh Yeon-seo) is a young girl who can see ghosts and always had to protect herself from ghosts by a small yellow umbrella with protection spells. One Day after exorcises the ghost for her, Woo Ma-wang Cha Seung-won), a mysterious man asks her help to retrieve a fan from a magical house where Son Oh-gong(Lee Seung-gi), the Monkey King, was imprisoned inside by Heaven for his crimes. Despite Ma-wang’s instructions, Seon-mi freed Son oh-gong with a promise that he would help her whenever she calls out his name. But, Son oh-gong tricked the Young Seon-mi and made her forget his name using his power.

After 25 Years, Son Oh-gong, to retain his place in heaven has to kill Seon-mi as she becomes sam-jang after releasing the monkey king. Things further get complicated when Seon-mi becomes oh-gong’s prey but also he is bound to protect her because of a trick by Ma-wang! His bound-to-protect responsibility turns into love after he started romantically involving with her. Thereafter, he is even ready to sacrifice himself in pursuit of love.

Interesting plots and performances made this drama phenomenal! Characters helping each other, at the same time, betraying each other will be unpredictable! The sam-jung character who gets caught between the bull, monkey, dog, pig, and zombie is an ultimate portrayal! The Monkey vs. Bull witty remarks at each other even at difficult times make this drama extremely amusing! The zombie and pig’s brotherly love will break one’s heart. Zombie girl (Lee se-young) deserves special applause for exactly acting as the so-called Zombies without any such Make-up. The robotic way she turns her head and her reactions (including, when her eyes pop out) are awesome. Her immediate new acting dimension when she becomes Ah Sa-nyeo, a shape-shifting demon is terrific and a spectacular portrayal!

Korean odyssey cannot be exceptionally termed as horror drama; it’s a pure black-comedy and full of fantasy Characters. Nowhere, it is scary!

Needless to say, A Korean odyssey drama is a binge-watch!!!!

The lead role “Son Oh-gong” was offered to Park Bo-gum, but it is reported that he declined the offer.

According to the survey released by Nielsen Korea, The premiere episode of Korean Odyssey ranked the most-watched show during its run in both cable and public broadcast Rankings!

The show suffered controversy when it was disclosed that one of the staff members was critically injured after falling on set.

The drama is distributed by tvN, and there is no documented evidence with respect to Awards! Hence, its Awards and Achievements are still unknown other than Ratings!