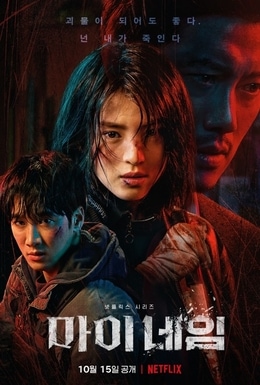 Han So-hee as Yoon Ji-woo / Oh Hye-jin, A girl who seeks revenge for her father’s murder.

Park Hee-soon as Choi Mu-jin , The boss of Korea’s biggest drug ring. He is the best friends with Ji-woo’s father.

Yeon Ji-woo is a student girl who is constantly bullied for being a Gangster’s daughter. His father disappears leaving her to be screwed by police.  The school decided to transfer her due to the other disgruntled parents. One day, she smashed all the girls who bullied her and dropped out from the school. That is on her birthday! She gets gifts and calls from her absconding father, but did not attend any! She seems to love her father but never talks with him for the very reason. finally, she lifts the call and grunts for making her life miserable.

his father came to see her, but when he tried to open the door, he sees someone pointing a knife. Yeon ji-woo could only watch everything through the door see through hole. She tried hard to open the door but her father holds the door so that she could not open! He died after asking her apology, even after knowing his death, he protected his daughter by all means!

Her Father’s boss, Choi Mu-jin who also mourns his friend’s death and pays his last respect. He is the leader of drug mafia gang. she asked him to help her in finding the murderer so that she would kill him. The boss is furious to see his best friend’s daughter wanted to kill someone. He slapped her and asked her to remain out his sight. But Ji-woo did not end it.

She vows to find the culprit and do whatever she could! she gets into trouble in the mid-way but was saved by the boss. He placed her in a full boy’s group in a gym who are in training to kill people. The boys gave her duties like cooking, washing and cleaning and mistreats her. The boss himself trains her. And, she became in top 2 at the inter-ring fight between the trainees. Will she win? says Episode 2.

The fight is now on between the most promising trainee Gangjae and Rookie ji-woo. The fight was furious and finally ji-woo knocked him down! He finds himself humiliated for passing out after beaten up by a girl. He with his friends concocts a plan to drug and rape her. She would not remember anything when she is up. But she manages to fight back even after drugged and the boss slits his face.

The boss subordinate who watching this all warned ji-woo personally to get out from this and reveals that neither her dad belongs to this group.

They fabricated Ji-woo identity. The boss made the plan that as Do gangjae killed Ji-woo was expelled from the gang, and Ji-woo got a new identity Oh Hye-jin. He gives a gun stating that this is the gun that killed her father and it might belong to a police department. After some years, she become an undercover for the boss gang and joins the police department.

She meets her new Captain Nah Gi-ho, officer in narcotics department. She recognizes him and recalled that right after his father was killed, he came to her house at midnight and knocked the door. Seen no response as she did not open, he just drove his car and went. She was quite obvious that he only killed her father. She conceals her emotions and meets him. He becomes her new captain! She often meets boss mu-jin secretly. He assures that the organization will protect her by all means.

Pil-do, her new partner does not even like her as before she spoiled his 6 months undercover case. The team along with the newbie, Oh Hye-jin (ji-woo) now tracks a drug dealer named Mango!

The team is heavily impressed by Hye-jin knocking out everyone and gets her hand on Mango! pil-do calls her his partner but asks her not to show off. mango’s leader is none other than Do Gangjae, the trainee who was expelled from mu-jin gang while trying to rape ji-woo. Now he became one of the top drug producers as his new drug was a hit which shake mu-jin business!

The police new target now is Choi Mu-jin.as all the cellphones are collected, hye-jin struggles hard to inform this to him, her real boss.

She told him details about tailing cameras and mu-jin removed it! Do Gang-jae with his new gang is back at the Dongcheon Gym and killed/ injured everyone. Hye-jin was shocked to see that the gym which she once trained is now in bloodbath. Right hand of Mu-jin, subordinate Tae-ju is also arrested by the Police.