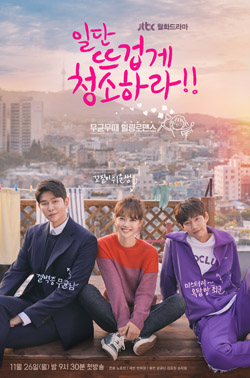 Kim Yoo-jung as Gil Oh-sol, a girl with a positive attitute. She does not really care about dirtiness.

Yoon Kyun-sang as Jang Seon-kyul, wealthy CEO of “Cleaning Fairy”, who has mysophobia.

Song Jae-rim as Choi Ha-in / Daniel Choi, a free spirit a psychiatrist from Rochester Clinic who lives on the rooftop of Oh-sol’s house.

Episode 1- His and Her Stories”

The character of the tale is Jang Seon-kyul, a wealthy and attractive man who also has a fear of germs. He is completely devoted to cleaning, and he even has a firm called “Cleaning Fairy” where he clearly has a thorough understanding of the industry. When he meets Gil Oh-sol, a carefree girl who is not troubled by her shabby clothing at all, his joyful, clean existence begins to get slightly screwed up. She always dresses in the same tracksuit. She tries to get employment at a cleaning company owned by Seon-kyul after being turned down by numerous part-time jobs.

Seon-gyeol thinks for a moment with all the street signs warning about pollution and the spread of diseases while driving, and he clicks his tongue at everyone who is out and about without a face mask. He comes to a stop at a stop sign, and his eyes drift across to the bus that is also stopped. Oh-sol is seen resting up against the window, her hair in a messy bun, and her lips slightly open in a huge yawn. As soon as the light turns green, he grimaces and leaves.

While others are hugging and cooing over one another in the study room dining room, Oh-sol finds it difficult to focus on her studies during her lunch break. A different pair of girls tunes into a live stream of Seon-speech. gyeol’s Seon-gyeol enjoins listeners to give up studying for civil servant examinations and job search self-help books because, in his opinion, they won’t make them truly happy. Oh-sol can’t help but glance down at her own study guide as he makes this claim. As an illustration, he uses his own success as a young CEO of a cleaning company.

And the cleaning service? Only handsome boys make up this group. The magical cleaning fairies stroll down a residential street while one man carries a vacuum. They had the attention of everyone on the street, including

While the cafe workers observe in increasing surprise, Seon-gyeol occupies himself at the mentioned lunch date by thoroughly cleaning the cafe table, chairs, and himself. A well-known news anchor who assisted him with his preparation shows up as his date. He cannot help but see how nicely dressed she is. She pulls her hair away from her ear, but only to reveal a large chunk of earwax.

Spitting out his coffee, Seon-gyeol quickly excuses himself to his date before leaving. However, his mother finds out about his unexpected entry and shows up at his apartment later with her employee Secretary Kim to question him.

As Oh-sol makes her way home while trying to write a message to her friend she notices Seon-lost gyeol’s vacuum stuck up against a garbage can. She put  the lost vacuum in her backpack so she won’t miss the chance.

But Seon-gyeol is already outside looking for Geum-ja, (his vacuum cleaner) and when he sees her in the street , he screams out to Oh-sol. But when he smells her wearing clothing that is many days old, he quickly leaves without waiting to hear her reply.

Oh-sol talks about running jumps in school as high school girls line up on a track. Young Oh-sol clears barriers as she talks about how her father likened them to challenges in life because as soon as you get over one, another one is waiting for you.

When Oh-sol the child received a first-place medal, Oh- sol’s father enthusiastically applauded. They then celebrated with a popsicle that didn’t split equally, and Oh- sol’s voiceover says that just like that popsicle, life hasn’t gone according to plan for her.

Grownup Oh-sol warms up for a sprint among other men and women as interviewers stand at desks nearby. The interviewers shake their heads as Oh-sol takes off after the starting pistol is fired before falling to the ground and the other runners pass her.

Suddenly, Seon-gyeol, who is sporting a brilliant, bright pink suit, tosses her a pair of hot-pink, elephant briefs. Oh-sol gets sprayed with disinfectant after Seon-gyeol advises her that she has poor taste in men and turns to leave.

Oh-sol experiences sickness at breakfast and rushes to the bathroom, but she hesitates when she sees Oh-dol (her brother )there and then she realizes something. Despite his protests that he was only interested in the cigarette in his hand, Oh-sol drags Oh-dol from the bathroom because she disapproves of the designer underwear he is wearing. That is what happened to them,

Seon-gyeol orders Secretary Kwon to terminate Dong-hyun and Jae-min, (their office employee ) once he is back at work. She suspects Dong-record hyun had a role in Seon-choice, gyeol’s but he already knew about that and tells her he wouldn’t have employed Dong-hyun in the first place if there were a problem.

Seon-gyeol is reminded by Secretary Kwon that Dong-hyun and Jae-min have been employees of the company since its beginning, but he won’t let his feelings get in the way of doing business. “At times like this, you’re just like your grandfather Chairman Cha.”

When Seon-mother gyeol’s calls him from the golf course to remind him that his grandfather’s birthday is the following day, she becomes upset when Seon-gyeol hangs up after explaining that he is busy. When her boyfriend inquiries about who could have hurt her, he is shocked to learn that it was her kid because Seon-mother gyeol’s has never been married, according to an assistant.

Episode 3: The Starting Point Is the Kiss

The news that they had formally recruited Oh-sol at his cleaning business seemed to have shocked Seon-gyeol. He interrogates Secretary Kwon about how they select employees, but she responds by saying that Oh-sol passed all the tests, and Secretary Kwon is eager to extol her abilities.

What does cleaning mean to you? Seon-gyeol asks to start their orientation presentation after he has collected himself.

After work, Oh-sol meets up with her best friend Joo-yeon, together for a small party. Although she concedes that Seon-gyeol is attractive, Joo-yeon chuckles at the weird fate that keeps bringing Oh-sol back.

Seon-gyeol is labeled as mentally sick by Oh-sol, who then begins to tell Joo-yeon about all the ways he drove her crazy on the first day.

The following morning at breakfast, Oh-sol’s father’s phone starts to ring nonstop with congratulations for his daughter’s new employment. Oh-sol just said that the business was a nice one to her family—not what the business was. Oh-dol (her brother) wonders if he should try to apply for a part-time position at the cleaning company where Yeong-shik recently landed a well-paying job.

Dad has zero interest in the position, and when Oh-sol points out that he works in the same field, Dad claims that’s precisely why he can’t endorse it for anyone. He desires for his children to have simple jobs free of all manual labor.

Following a pitch presentation to the corporation, Seon-gyeol and Secretary Kwon are already at the building the crew will be cleaning. Seon-gyeol is modest about his efforts, whereas Secretary Kwon is quick to commend him for his excellent work.

Oh-sol struggles with a long day of physical labor and wakes up late the following morning. As she rushes out the door, hurriedly spraying dry shampoo above, she has just enough time to wet her hair and grab some kimbap to go.

She barely misses the bus, but just in time, Seon-automobile gyeol’s is visible as he drives off for work. With food on her face and a bath towel still around her neck, she comes in to his open car window. When she asks Seon-gyeol to ride with her, he rolls down his windows and leaves.

When Secretary Kwon gets to work, her employer is leaned down inspecting the greasy fingerprints on his car windows. Seon-gyeol queries whether it is fashionable to wear a towel as a scarf or whether women apply makeup to their hair.

Secretary Kwon is confused as he leaves, but he understands when Oh-sol appears in front of her with a towel draped across her shoulders, her hair gritty with scattered dry shampoo. Secretary Kwon simply smiles when Oh-sol tries to claim that she required the towel from her workout that morning.

Oh-sol has a chance to call Joo-yeon while doing the housework. Oh-sol is warned by Joo-yeon not to overindulge at the business party that will be held that evening. She is also informed that Do-jin (ex-boyfriend) has been enquiring after her and asks her not to return his calls.