Sep 23, 2022 Legend Of the Blue Sea Episodes, Legend of the Blue Summary 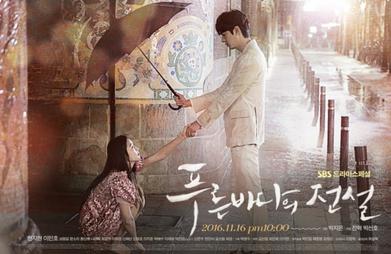 Jun Ji-hyun as Shim Cheong ,a mermaid in the Joseon era who came to present Seoul and fall in love with a man.

Lee Min-ho as Heo Joon-jae, a con-artist who involves in high level scams.

A mermaid in love with a Human!

In the year 1598 of August, the province of Gangwon-do, a massive storm appears in the seaside due to natural calamities. Villagers try hard to save their lives and secure their goods and run for shelter, while the fishermen struggle to safeguard their boats.

By morning, the sea tranquilizes itself. People start looking for the lost belongings and their stuffs. As they go little forward they see a cave where they find a woman struggling to move, after some time they realize it is a ‘Mermaid’.

People rush to the head of the village Lord Yang to tell the news. He excitedly hurries himself to see the Mermaid. Later, they bring her to the village and prisons her by tying up her hands with ropes.

Lord Yong reaches out towards her, but one of the fishermen warns him saying that if someone touches the Mermaid ,she can erase his/her memory with her powers which is said to be the Mermaid’s protective measure to safeguard themselves.

The lord promises the fishermen to reward  them tonight  before the arrival of the newly appointed mayor.

Dam Ryeong , the new mayor , on the other side rides among the crowds, and the jade bangle on his right wrist which attracts the most.

At the arranged banquet that night, Lord Yang starts to flatter Dam Ryeong extremely and then get into a conversation regarding the mermaids. At the first Ryeong tries to dismiss the stories as fiction, but Lord Yang tells him the astonishing fact and takes him down to his pond to reveal ‘THE MERMAID’!

The mermaid who had a golden skin with eternal beauty, looks up to them with her fascinating eyes, looking lost in the pond with her hands tied and lots of bruises on her body.

At the same time Lord Yang starts talking about business saying the oil made from mermaids are valuable, and boasts himself to be fortune enough to get mermaid in his land as he considers himself to be faithful for his country.

Dam Ryeong heard enough of it as he knew about the cruelty Lord Yang was doing to the fishermen by raising their taxes. And mentions that the rules were passed by the king against the government positions if they bothered to burden the people which could take his life away. Hearing to this, Lord Yang asks about his opinion regarding the mermaid.

He orders to release the mermaid back into the sea as himself goes into the sea to send off the mermaid. She pauses for a while before swimming and stretches her hand to greet while the Lord asks about the myth of forgetting memories and the fisherman mentions about the thing that if only mermaid wishes to erase, anyhow Ryeong reaches down too to take her hand and they stay eyes locked, holding hands.

In this era, Heo Jeon Jae (who looks like Dam Ryeong) disguises himself in multiple forms to trick people along with his partners Tae oh and Park.

Yet for another case they disguise themselves as lawyers and tae oh as hacker ,moves to the particular office to steal the money. They trick the watchman and move in as lawyers.

There they find a couple who had to handle the case to the lawyer regarding the suicidal elements of a person in his son’s school who had taken their son’s name. As the real advocate arrival seems to be seen through the hacker tae oh he initiates the team to be careful so they go out of the office announcing it to be the lunch break as they step out with the couple.

The wife mentions if they solve this case as they want, she would provide them with the funds as she had an account in an island.   Jeon jae refuses the offer and asks for the money to be funded for the island he mentions. The wife agrees.

Later, with the content of betraying the couple they seem to move to the respected island. Tae oh leaves without a goodbye as Jeon jae complains about this to Park and leaves.

Jeon jea reaches the island where there to be a big sea with mermaids and fishes swimming happily to their content. There inside the sea we find a mermaid with a silver body beautifully shaped swimming all over the sea finds a jade bangle and wears it to her wrist.

As the sea seems to be disturbed for a while she finds herself landed on a resort-side with transformed legs. She jumps back into the water but it was supposed to be a pool where she gets hr tail back. There she finds Jeon jae staring at the beauty of the surroundings and tries to hide herself.

After sometime Jeon Jae wakes up from a clanging sound and tries to find out what was it. Then he sees a girl with his jacket on and questions if she was trying to steal anything. He goes near her to touch but she defends herself by kicking him twice when he does the same thing. he tries to find out that she did it for a cherry. Jeon jae calls for security and the police cart the mermaid away with them Jeon jae remembers the jade bangle on her wrist and browses about it and discusses it with his partners and get to know that it is valuable.

On the other side the mermaid seems to be astonished to see each and every thing as she was new to this. As the policeman took her inside the prison and locks her up. When the investigation starts, she seems to be playing with tissues and later the gun too. . .

Later Jeon jae arrives to the station to check her and take her with him but the policeman does not agree to it.

As they come outside, Jeon tries to apology and extend his hands but the mermaid tries to defend herself again and backs off. Jeon asks her to come with him as he holds a piece of her jacket to make sure she is with him. As they move forward, she rushes through the traffic while he yanks her from back to stop and explains about the red light. The mermaid tries to imitate the symbol with her arms outstretched to copy the poster.

Jeon jae decides to takes her to the mall to buy her clothing as he feels pity.

As the move into the mall, she finds it be difficult to climb the elevator so he carries her in his arms where all people around adore it. He takes her to the shoe section to get the shoes for her bruised feet. He helps her out to wear the shoes. Later they move to try the dresses where he selects one and asks her to try it on. She did nothing properly as she comes out dress hanging on her head. Jeon jae again directs her to the dressing room and she manages to put on her clothes. As she moves out of the dressing room, she wouldn’t find Jeon jae as he had to attend a phone call he steps aside. The mermaid wanders around the shopping mall with the kids around her. As he returned to the shop he couldn’t find her and goes in search of her around the mall and finds her around the kids with a lollipop. As he found her he checks on if he could find that bangle on the wrist and sighs in relief and then makes sure if she is fine and warns not wander around without him. The mermaid smiles for the first time.

He takes her to eat after this incident where she doesn’t eat properly as the other people around started to mock at her. Jeon jae seeing these moves to help her out to eat and teaches her to eat as well. Sooner he hypnotises the mermaid too with his magic by bringing the lighter and burns a string which turns into a necklace and puts it on her neck saying they have become friends from now on and got the jade bangle out of her hand without her notice.

And then, he directs the mermaid back into the mall and asks her to be seated there till he returns and he leaves the place.

Jeon jae packs his stuffs and plans to leave the island while he asks his friend Nam Doo to wait for him for a week to get the bangle as he wanted to visit the Tower of Hercules.

On the way he keeps on thinking about the mermaid as his conscience wouldn’t let him go. On the other side the mermaid was asked to leave as it was closing time , while she had n where to go but seen to be seated outside the mall beside the streets where Jeon jae arrives and extend his hands and reaches down to take her hand and theirs eyes are locked, flashing back to the old memories.