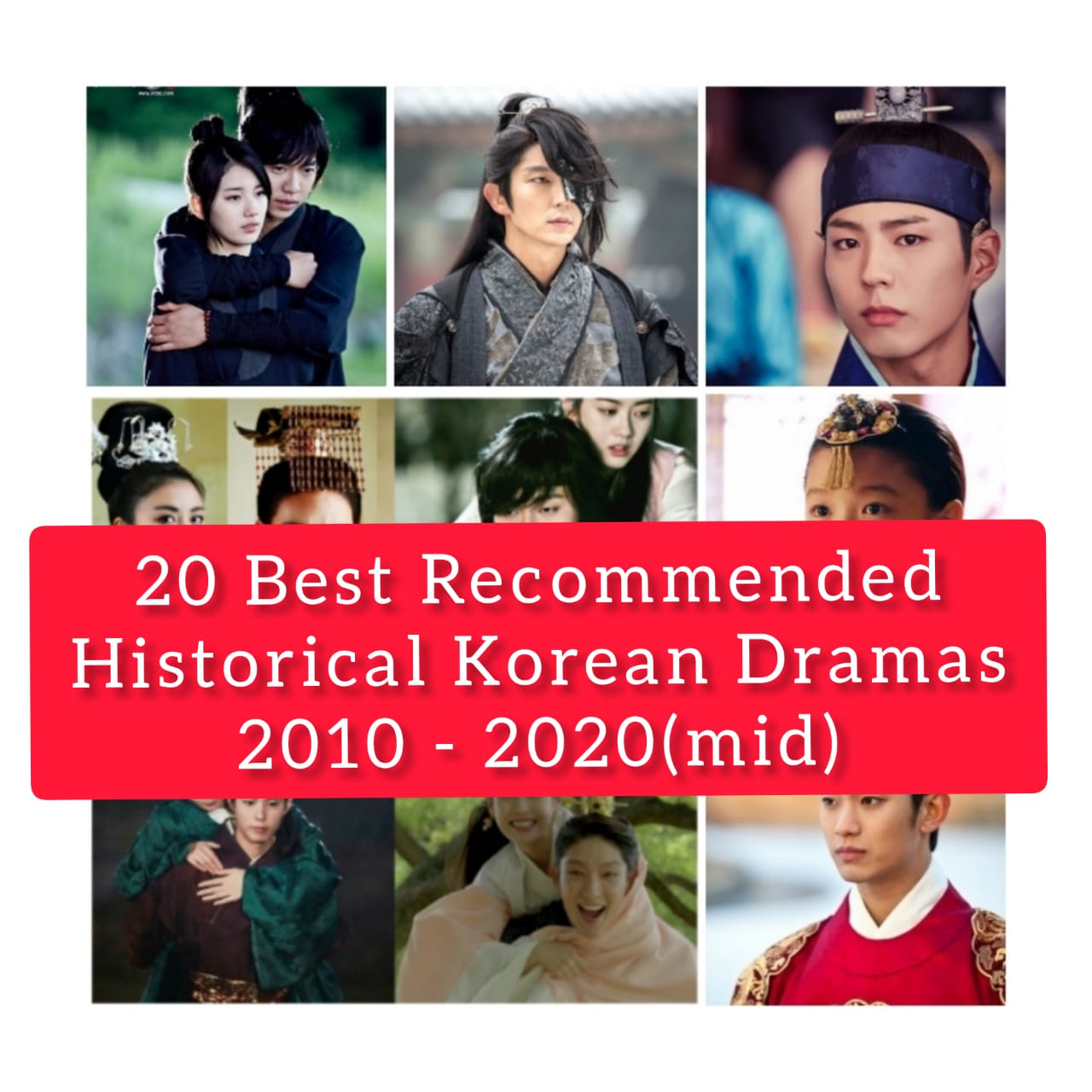 if You like Historical Korean Dramas,then ,this article is for You!

The Numbers are Just Numbers,It does not indicate Any Rankings!

The Story depicts the entire life of Choi Suk-bin, Royal Noble Consort Suk of the Haeju Choi clan, and One of the Best known Concubines of King Sukjong! The Story flows from how she entered the Palace as Water Maid and how she became the Royal Consort and the most beloved concubine of the King!

Dong Yi: The mesmerizing matured love between the leads will be amazing to Watch!

Based on Jung Eun-gwol’s bestselling 2007 novel The Lives of Sungkyunkwan Confucian Scholars, the story revolves around Kim Yoon-hee (Park Min-young) who disguises herself as her brother, Kim Yoon-Shik, in order to make ends meet for her family since society does not allow females to be educated or employed. When she gets caught by her fellow classmate (later, becomes her lover), she was acknowledged and supported by him and other 2 friends of hers!

Sungkyunkwang Scandal: One of the best dramas that embrace Love & Friendship

Plot: A princess falls for a noble and mature young man.

The Princess’ Man is a period drama about the forbidden romance between the daughter of King Sejo and the son of Sejo’s political opponent Kim Jong-seo. The drama portrays how the princess is stubborn in her love despite of his father’s threat.

The princess Man: The stubborn love of the princess will touch your Heart

Plot: Story of a royal guard investigating a case involving the serial murders.

King Sejong inevitably causes the death of his in-laws and their slaves, whereas two young slaves, named Ddol-bok and friend Dam were the only survivors. Ddal-bok vows to kill the king, but ended up working with the king instead of killing him.

Deep Rooted Tree: A Period drama about the origin of Hangul!

Plot: Love Story between the King and a shaman

Crown Prince Lee Hwon and Yeon-woo(palace’s Chief Scholar daughter ) fall for each other despite she is loved by the Crown Prince’s half-brother Prince Yang Myung. Finally, after defeating  Queen mother’s (who is actually the Crown Prince’s grandmother ) conspiracy, the crown Prince married Yeon-woo! The Queen mother cast a curse on Yeon woo and she is buried alive. The crown Prince reluctantly went on to marry as per Queen mother ‘s wish. But after 8 years, After seeing a shaman who looks like Yeon woo, the King(then crown prince) started an investigation on his wife’ s death, and still, the King has to protect his throne and the woman he loves!

Moon Embracing the Sun: A Sad love story with a happy ending!

Plot: A ghost tries to know her death with the help of a Magistrate.

The drama depicts the story of  Arang, who died unjustly and returns as a ghost as she wants to reveal who killed her. Kim Eun-oh, comes to Miryang in search of her mother, who he resented her before. Kim Eun-oh has the special ability to see, hear and touch ghost. Despite Eun-oh rejecting her request initially, he accepted to help her in finding about what she wants.

Arang and the magistrate: A nice Fantasy ghost centric drama!

Plot: Story of a woman who becomes the Empress

The series is about Gi Seungnyang, a Goryeo-born woman who pretended as a man and finally ascends to power in spite of the restrictions on class system! Later, On how She became Empress Ki of the Yuan dynasty by marrying the Emperor of Mongol Empire, Toghon Temür

Empress ki: A fantastic drama about the Life history of Lady Ki! Must be a fictional drama as the history says otherwise!

Plot: A half-monster who search a book to become a human

The depicts how Kang-chi, a half monster desperately searches a book ,that contains a secret to becoming a full Human and his love affair with a human girl Dam Yeo-wool .

Plot:The story tells about the foundation of the Joseon Dynasty

The drama depicts the young prince Lee Bang Won’s ambitions and Success in the foundation of Joseon Dynasty and his love life.

Six Flying Dragons: Terrific Six Dragons! One of the best Historical dramas of all times.

Plot: A Guardian Vampire who is responsible for getting rid of any vampire who disobeys the rules

The drama pictures how Kim Sung-yeol becomes a Vampire after the death of his family and Friends and what he must do to get rid of to find the secret in order to kill Gwi, who controls the royal court.

The scholar who walks the night: Vengeful vampire!

Plot: A crown prince falls for a eunuch, who is actually a young woman.

The story revolves around the childhood and adolescence of Crown Prince Lee Yeong. The Story further describes how the loneliness of the crown prince vanished after the eunuch named Hong Ra-on came into his life. On the Other end, the story depicts about whom exactly the Ra-on is, her family background, and the reason for disguise!

Love in the moonlight: Moonlight Syndrome! A fantastic romantic drama!

Plot: The Story of a Woman who,caught between the Royal Princes

During the time of the total solar eclipse, a 21st-century woman, Go Ha-jin who was then 25 years old, is made traveled back to the Goryeo Dynasty period. She wakes up in the body of Hae Soo, a cousin of Prince Wang Wook’s Wife. The Story describes How Hae Soo Struggled after she befriends with the royal princes who were forced to kill each other for the sake of the throne.

Moon Lovers: Scarlet Heart Ryeo: Deserves to be in Top 5 Historical Korean Dramas of All times!

Plot: An elite group of young men called “Hwarang” who discover their passions, love and friendship

The regent of Kingdom of Silla ,Ji-so ,creates an elite group called “Hwarang” to suppress the power of nobles who thrived because of bone-rank System. The Hwarang is full of Male Youths who bonds and grow with passion and friendship.

Plot: Love story of a scholar and the sassy princess Hye-myung

The story depicts how the scholar Gyeon Woo, who is considered as a nation’s treasure , falls for the princess Hye-myung after several funny encounters.

My Sassy girl: One of the best hilarious Historical Korean Dramas!

Plot: Story of Hong Gil-dong, who stole from the rich and gave to the poor

A Robin hood centric drama that portrays the story of Hong Gil-dong, a historical figure who stole from the rich and give it to the poor.

Starring Do Kyung-soo and Nam Ji-hyun.

Plot: A story that touches love, Betrayal and Marriage

The story portrays the childhood love between Lee Yul and Yoon Yi-seo. And, later, it highlights how they get separated because of family disputes but end up meeting each other as different people.

100 days my prince: A Love that Never Change.

Plot: A political Drama where the hero fights for sovereignty.

Eugene Choi, a United States Marine Corps officer has to fight for his home country’s sovereignty and for his love, Go Ae-shin.

Mr.Sunshine: A Deep Story that created awareness on the social class system. A must watch drama!

Plot: Two princes who enter into a rivalry due to their love for the same woman.

Inspired by the true stories of Grand Prince Anpyeong and King Sejo, the drama depicts the fictional love story of two princes Prince Jin Yang and Prince Eun Sung who enter into rivalry because of loving a same woman.

Plot: Love Story of a Historian and the Prince

Set in the Joseon era, where women are objectified and underrated, a free-spirited noble class(classes were defined in Joseon Dynasty),26 years old lady,  Goo Hae-ryung is brave enough to break the existing customs and engaged herself in Learning for Knowledge which was a mere dream for women in those ages. Not only that , she is also dare enough to defend people who are abused and wronged.The story flows how Hae-ryung with the help of colleagues and Prince, fights against the oppression!

The story depicts how Crown Prince Lee Chang faces political conspiracies while investigating a serious spread of a mysterious disease!

Here is Our Video,