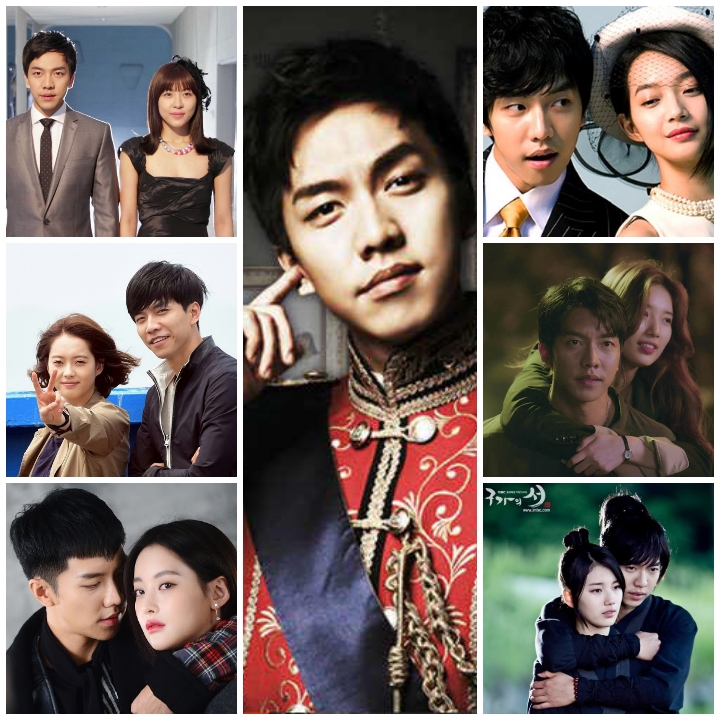 Lee seung-gi is a multi-talented artist who outshines in Singing and Acting! Besides, he appeared in many Variety Shows and Other Cameo appearances.

Treasured as the “Nation’s little Brother”, Lee is one of the most popular commercial endorsers in South Korea.

we tried hard to place 4 dramas in the top list, however, can’t take off any dramas as all are terrific and phenomenal. In addition, all dramas performed well with a good Audience share!

My Girlfriend is a Gumiho:

Lee Seung-gi acted as Cha Dae-woong, a college student who aspires to become an action star. One day, inadvertently, he releases a Gumiho (Shin min-ah), a nine-tailed fox by unsealing a painting of Grandmother Samshin ( the goddess of birth and fate in Korean Mythology).

The story tells the love story and the struggle of a Gumiho who desperately wanted to become a Human.

Cha Dae-woong (Lee Seung-gi), accidentally releases a Gumiho when he ran away from his Grandfather and Aunt. To his surprise, the Gumiho in human form (Shim min-ah) turned out to be a sweet and lovely girl contrary to the Korean Myth. However, out of the fear that the Gumiho might eat him, he feeds her everything he could to please her. She was named as Mi-ho by Dae-woong and he strives hard to cover her identity.

The story becomes intricate when Park Dong-joo (No Min-woo), a half-human, half-supernatural being tells Mi-ho a dreadly instruction to follow in order to become a full human. Without knowing the danger, she follows Dong-joo’s Guidance!

My Girlfriend is a Gumiho is one of the breakthrough dramas of Lee seung-gi which reserved him a place as a notable Hallyu star. Seung-gi won two awards at MelOn Music Awards Under best OST Song Category. Furthermore, he won Top 10 Stars and Excellence Award, Actor in a Drama Special at SBS Drama Awards.

Based On the Chinese classic novel ‘ Journey to the West’, A Korean odyssey portrays the war between Son oh-gong (Lee seung-gi) and heaven!

Lee seung-gi acted as Son oh-gong, an immensely powerful immortal Monkey King who possess several powers. Due to his mischievous and arrogant nature, his powers are sealed and he has been detained in a magical house in the human world. Thus made him mortal! Son oh-gong tricked the Young Seon-mi, a small girl who can see ghosts, to release him with a promise. To make his promise void, he even made her forget his name!

After 25 Years, things get complicated when Seon-mi becomes oh-gong’s prey that makes him immortal. However, he is bound to protect her because of Geumganggo, a magical bracelet!

Lee Seung-gi acted as Sunwoo Hwan, who was studying in New York and was ordered to return to Korea by his grandmother, Jang Sook-ja who runs a food company. As he dont have enough prior experience in managing the employees of his family’s food company, messes up always and end up leaving his grandmother disappointed. Things get complicated when Sook-ja bought a girl named Eun-sung to her house and announced her family members that she is going to appoint Eun-sung as her heir in case if she could raise the profit by 20% in one of the branch.  Eun-sung(Han Hyo-joo)had to accept as she struggles for her daily needs right after the day she was kicked out by his step mother, Baek Sung-hee after his Father’s disappearance.

Brilliant Legacy was among the top-rated Korean dramas of 2009; it maintained  top position in the viewership ratings chart for 20 consecutive weeks during its run and reached a peak rating of 47.1% for its last episode.

Lee Seung-gi acted as a son who born for a Gumiho, Gu Wol-ryung (Choi Jin-hyuk) and a Human named Seo-hwa. Right after he was born, He was adopted by nobleman Park Mu-sol. He named him Kang chi and he lives with them as a part of family. His super strength is exposed when his adopted family is torn into pieces because of someone’s greediness. Kang chi must retrieve the remaining members of the family who all suffers in different situations.

In addition, Kang chi needs to search for a book to become a full human. The drama further depicts how Kang-chi, desperately searches a book,  that contains a secret to becoming a full Human and his love affair with a human girl Dam Yeo-wool (Bae Suzy).

Together with Bae Suzy,he won Best Couple award at MBC Drama Awards in 2013.

Lee’s chemistry with Bae Suzy was critically acclaimed and eventually led them to pair up again in Vagabond.

Vagabond is one of the Action-packed series of lee Seung-gi. Lee acted as Cha Dal-gun in the series and another time paired with Bae suzy.

Cha Dal-gun is a stuntman whose nephew Cha Hoon was a victim of the B357 plane crash, which was tried to cover up by the terrorists and governmental conspiracies as an accident. To reveal and expose their secrets, Dal-gun unites with Go Hae-ri (Bae-suzy) and the NIS to find out the real conspirators behind the plane Crash.

The series has terrific chasing and action scenes and serious storyline makes it a spellbinding one. Lee has given a different angle of acting in Vagabond as seemed to be always a pensive Guy.

OTHERS NOTABLE DRAMAS OF LEE SEUNG-GI:

Lee Seung-gi acted as the Prince Lee Jae-ha, the Crown Prince of South Korea, a pompous and incautious guy with attractive physical appearance. After his brother, King Jae-kang, ascended to the throne, in order to make him responsible, he tricked Jae-ha to participate in the military exercise between North and South Korea, commissioned by both countries authorities. He has to undergo a proper training under Kim Hang-ah (Ha ji-won), A North Korean Special Forces Officer, nicknamed as Iron Lady with zero feminine Qualities. This is one of the main dramas which played a pivotal role in Lee’s successful acting carrier.

Lee Seung-gi is currently starring in a Series named Mouse as a police officer whose life changes upside down after chasing a psychopath Murderer.