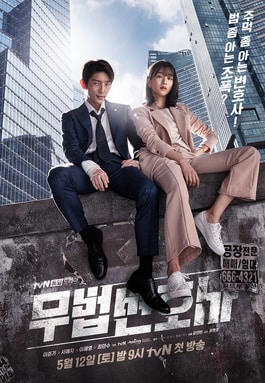 Lawless Lawyer is a Legal drama which portrays the childhood of Sang-pil, who sees his mother being killed by goons. Running away and with the help of his uncle, he becomes a lawyer who helps the high-rated criminals using the loopholes in the law. But he is waiting for the right time to avenge his mother’s death!  He uses Ha Jae-yi, a strong willed and righteous lawyer who is now suspended for assaulting a Judge.

Sang pil- Lawyer and the Founder of Lawless Law Firm.
Ha Jae-yi- A suspended Lawyer
Cha Moon-sook – A judge who is very powerful in Gisung(a city)

Episode 1: Sang-pil and Jae-yi and the foundation of Lawless Law Firm

The Drama starts with joon gi driving a car! No mass or heroic introduction, he is just shown as simply a normal guy who drives a car. Just after a second, he drives rash without abiding the rules.
Without minding the traffic police who chases him, he drives casually & rashly and gets caught finally! The traffic police when intended to get bribes from him, it is revealed that Lawyer Sang Pil(Lee Joon gi) trapped him in order to get evidence to defend one of his clients.

He now goes to save one of his other clients, an accountant who works for a local thug! He crashed the shutter, and took photos of that bunch of thugs beating the accountant! When they are about to fight, A man who looks like a leader intervened and both the parties greeted him with respect! And it shows all are now on the same team! Sang pil is a gangster & Lawyer!

On the other side, in a court verdict scene, the female protagonist character is being introduced. She found to be very righteous and strong-willed girl, however short-tempered to an extreme that she even gave a punch on the judge’s face for giving a wrong verdict by shouting ‘you are not right just because you are a Judge’. Previously, the judge gave a lawless verdict of 20 years sentence to a woman who killed her abusive husband accidentally while trying to protect her daughter and herself from physical abuse! Lawyer Ha jae Yi (Seo Ye ji) is now suspended for 6 months! She refused to submit an official apology letter by demanding that what she did is right as a lawyer and as a woman! (such a strong Portrayal!).

Bong sang Pil receives a parcel from an unknown person. He finds a diary in it and gives a confused look. meanwhile, jae Yi is fired for disrespecting the judge. Sang Pil seemed to be always following jae Yi. But why? How he is connected to her? The story reveals.

Sang Pil see in the news about a case verdict to be held in Gisung! Later, he informs that look-like leader (name is not revealed yet) that he is going to open a lawfirm in Gisung by showing the diary to him. When he asked if at all because of that woman?, Sang Pil says Yes! But who is ‘that woman’? Episode 1 reveals. Further, he calls him uncle.

While heading to Gisung, he remembers his trembling mother words she said when he was a child. she says, “don’t ever come to Gisung! Don’t believe anyone in Gisung’. It has seemed like his hometown is Gisung and he ran away to that look-like leader when he was a child after something unfortunate happened to his mother. He also once called that look-like Gang leader as Uncle.

Sang-pil reaches his place ask the occupiers to vacate (they are a gang who gives money against property/signatures, literally goons). when they refused to vacate and tried to intimidate him, Sang-pil gives them his Wang-So kind of treatment which made them accept him as a brother! Now they work for him.

Jae-yi returned back to her native as she is jobless right now! Her father who runs a photo shop, welcomes her.

Judge Cha moon sook, the most respected and powerful woman in Gisung, gives a revolutionary verdict in the domestic violence case which was praised by the media and jae Yi seemed to be quite close with Moon sook. And sang pil is also present.

Sang-pil gang tries to eliminate jae-yi and his father from their photo studio by threatening with a debt Contract. And finally, jae-yi meets Sang-pil.

Despite sweet argument, jae-yi punches Sang-pil and ends up in jail.

A sudden flash back of her mom being threatened by a bunch of thugs flashed his mind. At all cost, they wanted a memory card from her. Child Sang-pil swallowed it as he doesn’t want to give that to the goons. Finally, they kill her, and the child Sang-pil escapes and reports to the police officer who passes by.
After knowing that the detective itself is one of the accomplices, he immediately bit him and the car they are in gets crashed. Young sang escapes with mild wounds and reach his uncle, a thug!

Now, Sang-pil has that memory card.

Sang-pil visits jae-yi and tells his plan of hiring her as an office manager and as a partner; he also gives her an offer that he would even revoke her suspension. When jae-yi refuted back by stating that she would never become a partner with a thug, he stood up and off the conversation by telling that she would get the interview result soon.

When she doesn’t even know what’s happening, she is been released from jail and gets a text message that she is hired as an office manager.

Hae-Yi agreed and now works for the first case of Lawless Law firm. Sang Pil explains the case to her, the murder case of the Gisung Mayor. The defendant is the detective who conspired with others to kill Sang-Pil’s mom! But he is going to defend the man who involved in his mom’s murder.