It’s Okay To Not Be Okay Summary 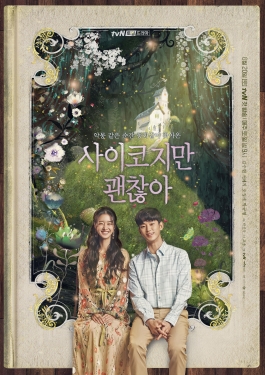 The Drama depicts the story of Moon Gang-tae (Kim Soo-hyun) who lives with his autistic older brother Moon Sang-tae (Oh Jung-se). They Often move from town to town and changes their residency ever since Sang-tae witnessed their mother’s murder. Gang-Tae takes up jobs as a caretaker at every place they settle in. While working in a hospital, he meets a famous children’s book writer Mun-yeong (Seo Yea-ji), who is rumoured to have a kind of personality disorder.

Circumstances lead the trio slowly begins to heal each other’s emotional wounds and move forward in their lives.

The story starts with an animated girl who yearns for love. she is always lonely and isolated and called as monster. None wanted to talk with her, however, once when she was fishing, she caught a boy instead of fish! To avoid her anger towards the world which rejected her, she always goes for fishing, and kills every fish by trample it. And she did the same to the boy who was caught in bait hook. Inadvertently, she saved him as his stomach is full of water and trampling regained his consciousness. That boy started following him through day and night. Finally, the girl asked him if he could stay with her forever. The little boy said yes!

After seeing her eyes changes to fiercy red color, the boy runs away. She again is left alone.

When some voiceover says that she cannot expect people to be with her since she is a monster and always has the shadow of death. The animated girl, now becomes a pretty lady, and answered to the voice, “yes, Mother”.

Gang-tae is a caregiver who excels in taking care of mentally challenged. On the other hand, Ju – Ri,  gang-tae childhood neighbour and long-time friend, works at a hospital where mun-Yeong dad is being treated for dementia. They try to get her signature in order to operate her father. But she always thinks that he is dead and never cooperates. She asks the caregiver ju-ri to come to her house in case if she needed her signature. Her superior insisted the same. Her father even panicked to hear about his daughter. He doesn’t want her to come to his place. However, ju – Ri goes to Seoul to see her and his long-time friend, gang-tae.

Mun-Yeong visits gang-rae hospital to tell stories to autistic children. When sang-tae insisted to meet her, gang-tae pacified him by saying that he would get her autograph if he can. There, gang-tae meets mun-Yeong for a short time! She behaves like a extreme psychopath when even threatens children with her fearsome stories.

A patient escape from the ward and wanted to kill his child, who was previously recovered from him when he tried to kill her. He interrupted the session of storytelling and takes her daughter without anyone knowledge. Mu-Yeong sensed something bad and followed him meanwhile gang-tae too looks for him.

Mun-Yeong told him to die if her want and furious father choked her and through that incident, she recalled how her father did the same to her when she was a child. Gang-tae caught him finally and tied him, mun-Yeong took a knife and tried to kill him but was intervened by gang tae, he suffered a superficial cut in his hand as the knife pierced his hand when he tries to save the patient from mun-Yeong. Gang-tae is terminated from the employment to cover up the incident.

From mun-Yeong side, to cover up the incidents in order to avoid unnecessary news coverage, her CEO wanted to bribe gang-tae, to shut this mouth. To the world, if someone knows that she hurt a caregiver, it would affect her book selling.

Gang-tae made his friend to sign as mun-Yeong to make his brother believe as her autograph. He found that and he acts just crazy. At the same time, Yeong mind is full of gang-tae.

Gang-tae meets mun-Yeong!!! When she asks what Mr. LEE, her CEO offers to silence him. He replied he came as he could meet her once again which melted her unwarm eyes. He says that her eyes remember him someone he liked. Though, cold, fearsome, he liked that eyes.